I am very pleased to announce another freebie — this time an Easter thank you from everybody at Candy Jar Books. An eBook introductory pack for the Lethbridge-Stewart series. 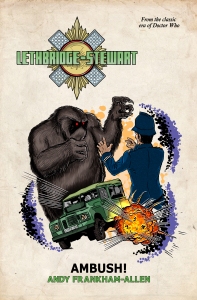 We can also announce that sadly Lance Parkin is stepping away from the project for the moment. Shaun Russell, head of publishing at Candy Jar, said: “Lance is such a huge talent in the world of Doctor Who and we have left the door open for him to return. Hopefully, one day, Lethbridge-Stewart will make it to Det-Sen.”

As a result we’ve had re-organise our 2015 release schedule, bringing forward David A McIntee’s The Schizoid Earth. A replacement novel will follow a few months later, which is a prequel/sequel to Terrance Dicks’ acclaimed 1977 Doctor Who serial, Horror of Fang Rock which starred Tom Baker. Beast of Fang Rock will be written by Terrance Dicks and me. And, as originally planned, 2015 will still be rounded off with Mutually Assured Domination by Nick Walters.

And the news doesn’t end there. We are finally able to announce the details of our authors for the 2016 schedule. They are, in no particular order;

So, exciting times ahead! In the meantime, while I edit David’s book and work on Beast of Fang Rock with Terrance, I hope you enjoy the free eBook. More special releases coming soon from this site!

But it’s not only me. Shaun Russell, editor-in-chief of Candy Jar Books is there too, as well as Hannah Haisman… The topic of discussion? Why, Lethbridge-Stewart, of course!

Personally life has been an odd one. Started off in a great place, hopelessly in love, certain I’d found my soul mate, but that soured throughout the year until it totally collapsed in August. Which was fun. I still feel I had found my soul mate, my ‘one’, alas it seems he was only the ‘one’ for the best part of two years. Of course, as one would expect, the ending of it was terrible, with all kinds of emotional fallout, leading to distractions of the worst kind. But I came through it, and I now sit here able to look back and realise that for all the pain, I have grown once again. Probably became harder as a result, less forgiving of people. (Which explains my rather cold response to a family member who sunk into what I can only call alcoholism, to the point where she absolutely failed to take the advice and help offered to her. And also explains the dissolution of long-term friendship with someone who crossed a line I could no longer ‘go along with’.) I think I am now at a place where I’m actually looking to where my next ‘one’ is — I’m sure he’s out there somewhere. Only this time it’ll be someone who isn’t so far removed from my own age — not that I believe in the idea of an age-gap. After all, a number is just that, but the practicalities of a relationship with a large age-gap are something to be considered. And heeded. What’s the point in going through a bad experience if you’re not willing to learn and do better the next time?

Professionally life has also been an odd one. I started the year in the same role I’d inhabited for the last four years, that of range editor for Space: 1889 & Beyond, only I could already see the end in sight. Things were falling apart behind the scenes — my relationship with my publisher was souring drastically. Was this connected to what was going on in my personal life? It’s entirely possible. At least, the two things did not help each other.  I still intend, one day, to tell of my experiences and view on how the series failed, but for now all I can say is I was personally disenfranchised by the whole experience, and was determined to see it end, so that it could be reborn in a stronger manner. So, mid-way through the year as Space: 1889 & Beyond limped its way to the final gate, I found myself in the position of being commissioned to oversee an exciting new project. And all because of a simple Facebook status I wrote! Of course, anybody who has read this blog (and many more besides) are aware of the project now — Lethbridge-Stewart, a new series of novel based on the legendary character from Doctor Who. The series still hasn’t begun,  but I have been working hard on it since the beginning on July, pretty much every day since the license was agreed. It has been a crazy six months, working alongside authors who I have always counted among some of my favourites, writers responsible for some of the best Doctor Who prose during the 1990s. The thrill of announcing the series at the start of December cannot be described — the news spread like fire. It seemed everybody was talking about. Including Digital Spy! Insane, I tell ya. My publisher totally didn’t see it coming, but I think I did, as he remarked to me. Because I had been working on for quite a while, I think I started to get a feel for just how big a deal it was, whereas Shaun was busy on other projects for Candy Jar Books. But when the news was out there, well, then Shaun learned just how big this was, too!

And so here I am. The end of 2014, with what may well be my biggest book yet on the verge of being released into the hands of the public (the verge, in this case, being late February), single, but pretty content with how things are. Sure, they could be a lot better, but when I consider all that happened in the last six months I realise I’m a very lucky chap indeed. I’m the controlling element of a series which is going to bring a hell of a lot of readers excitement and fun, and I get to establish the official story of one of the biggest television characters of the last fifty years. I have some amazing people to work with over the next few years — hell, just the following year will see me work alongside some of the best authors out there, and this is only the beginning. So, yes, it’s been an interesting year. At times hard, at times the most fun ever.

So, big thanks to all who have helped to make it such a great and odd year. And I mean to all, even the lost love. Time for my annual sharing of this song, and the words are truly what I believe…

Been a tad quiet on here last few days, mostly because I’ve just been soaking up the ’60s vibe with a ton of music. Which isn’t that exciting to report on.

So, instead, here’s a picture of me and my fellow author, Anthony Ormond, and the head honcho of Candy Jar Books, Shaun Russell. We were down the Hayes in Cardiff, selling and signing books and meeting our adoring fans. Most of whom were obviously put off by the tempestuous weather. Still, it was a nice day with much talking about Project Hush-Hush and the exciting follow up to Anthony’s brand new novel, Tommy Parker: Destiny Will Find You!

Prepare for one of the more odder entries, as I enter my own version of the twilight zone. Kind of.

Talking to Shaun last night about the ’60s and he expressed how odd he found it that I remembered so little about that time — even though I was born in ’72, a lot of the ’60s vibe still existed during my first few years and I should, really, has some idea about that time. Some kind of memory, right? You’d think so.

Fact is I’m pretty sure I didn’t exist until I was six years old (of course, if I didn’t exist then I couldn’t be any years old, just looked like I was), like something out of a John Wyndham novel, perhaps. I have vague memories of being younger, I think, like falling down the stairs and banging my head on a hot radiator (which is funny since, according to others, I never lived anywhere with a radiator at the bottom of a staircase). But the thing that confirms it for me is that there is no photographic evidence of me any younger than six. I’m serious. Now, knowing my family, the chances of no photos being taken of this handsome little version of me would be astronomic. Yet, nothing exists. I seem to recall a picture of toddler me holding a gun and wearing a cowboy hat, sat on a furry carpet of some sort, but I’m convinced I made that up since such a picture does not exist and no-one else can remember it. So if I’m right, then I didn’t exist until 1978, which explains my complete lack of familiarity of anything pertaining to the late ’60s.

When the boss quizzed me on certain things, like what I do I remember of the red telephone boxes, I could only pull up a few visual memories. Peeling paint, tattered phone books hanging off hooks, felt-tip graffiti, stuff like that. But you know, I could have picked that up when I was about six or seven; such things still existed. Or kids — did I remember how grubby kids were back then? The messy streets, rubbish on the pavement? Vaguely, perhaps. Certainly I know I wasn’t a messy child (as you can see in the picture to the right). No grubbiness here. Or was I? I don’t know. I didn’t exist before I was six. Perhaps I was, until that point, the forgotten son? That would fit.

So today I’m looking up all kinds of things from the late ’60s. I’ve seen a few cars I recognise, although most of the radio shows from Radio 1 mean nothing to me at all. As for the money… Well, what can I say? I was born the year after the UK went onto the decimal system — thank god! Damn, I feel as confused as Ace did in Remembrance of the Daleks. ‘Oh this is a stupid system.’ You said it, Ace.

In terms of actual writing, I’ll be moving on to chapter two, which will involve a very strange train journey, an old woman hearing a disembodied whisper, and the discovery of a missing corpse. At the moment I seem to going for a bit of a The Midwich Cuckoos meets Danger Man feel. As I said in a previous post, I’m all about blending genres.