The day is here. After almost eight months, Lethbridge-Stewart the series officially begins today. Pre-orders have been shipping the past week, but today is the day that sees the first book in the series available to the public at large. It’s been quite a long journey, but worth every second, although now the book is out there I’m in a position of waiting to see how well I, and the rest of the team at Candy Jar Books, have done my job. Reviews have started coming in, and here are a select few from pre-order readers:

It felt like I was watching it on television, picturing it clearly in my mind’s eye as I was reading, hearing the characters’ voices as I watched the events unfold.  Much like The Sarah Jane Adventures offered a deeper look into one of the Doctor’s best loved companions; Lethbridge-Stewart offers a deeper understanding of one of his greatest human allies. – Katt at Nerdversity

A very good launch to a new series of books looking at Lethbridge-Stewart’s history between The Web of Fear and The Invasion. Very well written, if you know your Who you’ll probably be one step ahead of Alistair, if you don’t you’ll enjoy it just the same. Well recommended. – Goodreads’ reader.

I did have a worry that like some of the New Adventures – which I think I read somewhere was an inspiration to the author – this story wouldn’t fit in with the fictional universe of Doctor Who in the 1960s – by being too modern in its approach. But this achieves the aim of presenting something broader and deeper (to coin a phrase from the NA series) than ‘60s Who without compromising its style and principles. I almost felt this was the novelisation of a spin off series broadcast just after the watershed on a Sunday in 1968 – faithful to its time but still doing something a little different than the parent series. – Reviewer on GallifreyBase Forum

With a number of mysterious layers to intrigue and entice, the puzzle over the colonel’s background and the disappearance of a dead soldier to keep you guessing, The Forgotten Son is a superb opener to the series, mixing recognisable Who lore, suppositions by cast members, tear-jerking dedications, a foreword by the great Terrance Dicks, and the familiar smile of the man we came to know as the Brigadier. – Kasterborous 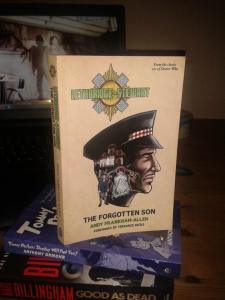 … Which do rather suggest that it’s not a bad book. I certainly hope so. In many ways this is the culmination of my journey as a writer thus far, where my professional career smashes head first into the most important fictional escapism I had growing up. And, of course, from a fan point of view, I am aware of how many people are invested in the lead character and the responsibility resting on The Forgotten Son as the first book in the series.

The book can picked up from any book shop (although they’ll probably need to order it in), with digital editions available from all good eBook stockists. You can buy the paperback online direct from Candy Jar Books, or various retailers via Amazon, and places like the Book Depository.

Alternatively, if you can wait until Saturday, you can drop by The Who Shop in London and buy a copy there, and get it signed by not only me, but Terrance Dicks, Ralph Watson (who played Captain Knight in The Web of Fear), Hannah Haisman and, if you time it right, maybe even get a scribble from David A McIntee and Nick Walters. We’ll be there from 13:30 to 15:00.