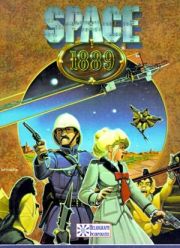 We are very pleased to announce a Red Letter day in the history of Space: 1889. Almost twenty-five years ago Frank Chadwick, with the Game Designers Workshop, created the Role Playing Game, and now, for the first time since the early 1990s, Frank Chadwick returns to universe he created with the release of his first novel for the property; A Prince of Mars, book #5 in the best-selling series, Space: 1889 & Beyond.

Frank is a guest over at The Traveller’s Steampunk Blog, where he talks with the Traveller in-depth about Space: 1889. Here is an excerpt;

Traveller: How many series of Space: 1889 & Beyond are planned?

Frank: Several. Sorry I can’t be more specific but much depends on how well these first several series are received. I can tell you that the first series has been well enough received that the second series is already being written, and it will be expanded in word count to about half again the length of series one. There are certainly more series after that in planning, but we’ll see.

One of the best things about Space: 1889 & Beyond is the number of really good writers Andy has signed up to pen entries in the series.  If we can keep getting outstanding writers as our authors, I’d be happy for it to go through five or six seasons at least.

Traveller: Is there any place in the Space: 1889 Solar System you are particular proud of?

Frank: Mars, absolutely. Mars is my favourite setting, and I think it shows. The board game which is the prequel to Space: 1889 is Sky Galleons of Mars, and the interplay between Mars and Earth is central to the unique aspects of the Space: 1889 universe. I was particularly happy that the story I was tapped for in the first series of Space: 1889 & Beyond was set on Mars. It not only gave me a chance to revisit my favourite planet from this universe, but also elaborate on a few themes and have a bit of fun with the background. A Prince of Mars is, in many ways, a story of scales falling from European eyes.

Traveller: How does Space: 1889 & Beyond tie in? Is the material in there considered canon for the RPG?

Frank: Yes it is. Some eyebrows have been raised concerning shipboard gravity on HMAS Sovereign, but as the first series hints, there is more to it than meets the eye, and the second series will reveal the secret behind it, which will also answer one of the burning questions about the worlds of Space: 1889 which has been out there since the first publication of the book. So Space: 1889 & Beyond will actually explain part of the canon which was never explained before.

A Prince of Mars excerpt;

Kak’hamish felt his stomach turn cold at these words. For as long as people remembered, naughty children had been threatened with visitations by the Old Ones, the ghosts of the mighty and terrible architects of the canals who screamed from beyond the grave for vengeance against those who had allowed their work to crumble. But these were grown men speaking as if the Old Ones were real, had substance in this world, and could walk among men. And what did the priest mean by tasted the eyes?

They came to the lowest level of the cargo hold, unevenly lit by swaying lanterns which cast monstrous, creeping shadows across the uneven walls. The wind blew from the open hatchway which led to the loading platform, beyond which loomed the yawning blackness of the night sky. In the open space at the centre of the hold the servant of the priests laboured, pulling the sarcophagi from their wicker protective cases. Something in the way the servant touched the sarcophagi, reluctant with both revulsion and fear, made Kak’hamish shudder.

“Those two,” the head priest commanded, pointing at two of the sarcophagi, “stand them upright. Let the unbelievers confront the Worm face to face, eye to eye.”

“Shistomo will join us soon enough,” Jed-An protested. “Will you at least wait for your superior’s orders?”

“No! If he orders the sacrifice, the Old Ones will love him, not me. If he forbids it, the Old Ones, in their slumbers, will wonder why I did not act when I could, will ask me this when we meet, and what will I say to them? That I waited? That I took careful counsel of a worldly prince? Stay and watch this miracle or, if you have no stomach for it, go now.”

Jed-An turned wordlessly and left, followed by four of the judges who Kak’hamish recognised as the four bodyguards from the caravan. The sixth black-clad figure, the stooped and shuffling translator, lingered, and his eyes glowed with anticipation.

“Watch the prisoners while we prepare the Old Ones,” the head priest snapped and then summoned the other priests with a gesture.

The servant backed hastily away from the sarcophagi as the four priests moved to them, two priests for each sarcophagus. They carefully broke the clay seals to either side and then ran their knives down the seams between the lid and body of the containers. About half-way down, Kak’hamish heard a sigh of air, realised they were cutting a wax seal on the containers, and within moments he caught a scent of rotting corruption and immediately vomited, as did the translator behind him. Nathanial, still lying senseless on the deck where the priests had dropped him, now stirred, rolled over on his side, and vomited as well.

Kak’hamish had crawled through sewers, through the rotting garbage and excrement of ten thousand people, had almost passed out and died from the stench and lack of oxygen.  He had seen and smelled a hundred bodies thrown over a city wall and left to rot in the sunlight, had hidden under them for days while they swelled taught like inflated bladders, then split and spilled their vile fluids over him. He had experienced all that and even worse, but none of it approached this smell.

Kak’hamish took a step back away from the sarcophagus, but stopped when he felt the point of a knife in the small of his back.

“You’d leave your British friend to his fate? Shame on you!” the translator hissed in his ear, and pricked him again with the point of his blade. The head priest turned, saw the situation, and nodded.

“You watch the English,” the priest said to his own servant, who crossed the hold to stand over Nathanial’s prone figure, staying as far away from the sarcophagi as he could.

The priests carefully lifted the lids of the sarcophagi and moved them to the side, and Kak’hamish found himself staring straight at the empty eye sockets of a blackened and rotting corpse, the flesh dripping and in places sliding off the bones. The odour became almost overpowering, but it was more than just rotting flesh, and as he stared he realised the eye sockets were not completely empty, that something moved inside.

“The vessel is consumed,” the head priest said.

“The vessel is consumed,” the others chanted in unison.

“The Old One hungers,” he said.

“The Old One hungers.”

“Come forth and live,” the priest said, and held his hands up, as if in supplication, in front of the corpse’s face.

“Come forth and live.”

“Come forth and feed!”

“Come forth and feed!”

Barely making it to Mars in their crippled aether cutter, Nathanial and Annabelle crash in the desolate Martian wastes. A disfigured Martian with a mysterious past helps them survive in the desert, but when they are rescued by a passing caravan their troubles may only have started.

Raids by steppe nomads and flying skrill riders are the most obvious dangers, but simmering resentment against Earth humans, and intricate plots to overthrow the British colony, lurk everywhere just beneath the surface.

Apparent friends become enemies, unexpected allies appear from unlikely sources, and the shadowy past of their Martian guardian collides with the sinister plans of the murderous head of the dreaded Martian Cult of the Worm…

A Prince of Mars is now available from the following e-stores;

… and will soon be available in every other e-book stockists out there.

A Prince of Mars © 2012 Frank Chadwick and Untreed Reads Publishing.

First of all, a little bit of Space: 1889 & Beyond news. Once again, the series dominates the Top Ten Best-Sellers List on Untreed Reads Store; that makes five months in a row now. And, as a result, all four titles can now be bought direct from Untreed Reads with a 25% discount throughout February. The perfect time to introduce your friends to this smash hit steampunk series!

Now for something really cool! I was recently interviewed by the Comic Guru himself, Kristian Barry, for his ongoing YouTube vlog. For those of you who do not know me beyond my writing, this will be a  nice little insight in to the person I am – the pure cheek of me! Check the interview out below, and please feel free to share it around.