This is a rather unusual blog entry, as it’s not an update on any of my writing projects, nor is it an excerpt of a forthcoming book. Instead it’s a call out to you… yes, you!

I’m sure most of you have heard of the ‘It Gets Better Project’, but those of you who haven’t, here’s the lowdown.

Growing up isn’t easy. Many young people face daily tormenting and bullying, leading them to feel like they have nowhere to turn. This is especially true for LGBT kids and teens, who often hide their sexuality for fear of bullying. Without other openly gay adults and mentors in their lives, they can’t imagine what their future may hold. In many instances, gay and lesbian adolescents are taunted — even tortured — simply for being themselves.

Justin Aaberg. Billy Lucas. Cody Barker. Asher Brown. Seth Walsh. Raymond Chase. Tyler Clementi. They were tragic examples of youth who could not believe that it does actually get better.

While many of these teens couldn’t see a positive future for themselves, we can. The It Gets Better Project was created to show young LGBT people the levels of happiness, potential, and positivity their lives will reach – if they can just get through their teen years. The It Gets Better Project wants to remind teenagers in the LGBT community that they are not alone — and it WILL get better.”

Joe Glass (creator of GLBT superhero comic book, The Pride) and I are putting together a collaborative novel to be published by Untreed Reads to raise money and awareness for the ‘It Gets Better Project’. A coming together of every spectrum of sexuality – everything from straight to gay and transgender, and all those grey areas in between. We’re calling on testimonies from those who have found it difficult in dealing with their sexuality, in particular we’re currently looking for people who are still living ‘in the closet’, who are frightened, for whatever reason, to publicly announce their sexuality. You can tell us your names, or not, it is entirely up to you, as long as you tell us your story so we can put it in the novel.

If this sounds like something you want to be part of, and feel it’s time to share something of yourself you have thus far found difficult to share, then please drop me an email;

– your anonymity is ensured.

Thank you, in advance, for your time.

In other news, the nominations for the Steampunk Chronicle Readers Choice Awards 2012 are now open. So please do pop by and nominate your favourite steampunk works of 2011 (I hear that Space: 1889 & Beyond is kind of cool).

National Coming Out Day. You know, I hadn’t even heard of such a thing until my guest blogger, author Bryl R Tyne, told me what he’d like to talk about. In the US National Coming Out Day was Monday (Oct 11th), and in the UK it was yesterday (Oct 12th), so it seems apt that this week I have a gay author talking about writing gay books in a world where being gay really is becoming less and less an issue…

Am I coming out? Not hardly. I pried open my closet door in 1996, tippy-toed out and back in over the years, and finally, loud and proud in 2008, I came charging out Katy-bar-the-door style with the byline ‘An Author Defying Description’. I’m proudly using that same byline today.

Not to assume ambiguity, I assure you, but more to prove a number of points. The most relevant, my distaste for labels. Labels are the beginnings of many negativisms: stereotyping, bigotry, to name a couple, and take it from me, self-hatred. When there is no one word to describe you, no matter which label is chosen it never quite seems to fit. Suffice to say, I have been labeled by society, and at worst, labeled by those who claimed to love me.

But hey. There’ve been times when even I have labeled myself. 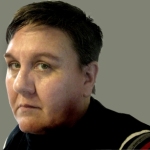 There will always be different aspects of me, or my life, that fit into someone’s neat and tidy boxes. If that makes you feel better, safer, less intimidated or more in control, so be it. I’m me; and I will not apologize for who I am nor try ever again to change into someone I am not. If you need boxes to help you make sense of your pithy-minded lives, that’s really no reflection on me now, is it?

What’s sad is the toll this kind of posturing takes on the individual, though. For those who don’t know me, I’ll tell you up front. I’m a tough one. I’ve lived through abuse, physical, mental, psychological, and sexual, and survived countless beatings, some to the point of unconsciousness. I may appear to be one of the seemingly few, but there are many others out there just like me. For that which we lack in strength, we compensate for in sheer stubborn will. Yet even the most determined of us are riddled with weaknesses.

I know I am, and my usual act of self-punishment is overindulgence. Sounds like nothing, but when the indulgence can take any form or vice, it can be rather scary, at times. Still, others feel they have no out, no release… no other choice but to give up. We’ve seen the increase in reports of teen suicides and the reported bullying that led to most of these recent incidents. Yet, I wonder how many more go under the radar or are simply near misses. It’s an atrocity some cannot accept others for their differences. Diversity really is a beautiful thing once you embrace it.

That leads to my reason for writing characters encompassing the Queer spectrum and penning them as the heroes and the heroines, winners and leaders, protagonists without apology or shame. I’ve always had an affinity for the downtrodden, the outcast, the ones who, no matter how ready or fit, never quite seem to ‘fit in’.

Unlike the news stories though, in my fictional realms my characters, no matter how beaten down, are resilient. My characters don’t give in, up, or out — not entirely. They never die, pointlessly. No. In the end, my characters win.

Isn’t that the role of fiction, though? To help us escape into worlds where the norm is never really the norm? To allow us an occasional glimpse of an ideal world? In my mind, I’d like to believe that. Though most of my stories feature gritty, true-to-life scenarios, one cannot help but note that all of my stories share one common theme: HOPE.

With society on the crux of many changes and youth caught between those changes and the plethora of personal changes and issues each endures as he or she grows, I

believe that hope is an important message to share with readers of LGBTQI fiction today.

I’ve been there, done that, and surprisingly, I survived. That is why this Queer writes Queer.

Bryl R. Tyne is a wrangler by nature and a writer by choice, published with Noble Romance Publishing, Ravenous Romance, Dreamspinner Press, STARbooks Press, Untreed Reads Publishing, Changeling Press, and coming Oct. 31st to Amber Allure with TOUGH GUY. You can find out more about Bryl at: bryltyne.com